A different method of mixing the liquid part with the mix

Today I will explain a way of mixing and making boilies that I have devised to optimise and control the ratio between liquids and solids in the mixture. How to make very tasty and aromatic boilies, with a constant quantity of attractants and flavours between one production and the next.

Everything is explained  in detail in both my books, having said that I will try to make a very basic summary here, in the pills of bait guru blog.

Basically it's a process of mixing the mix with the liquids that serves to make the flours absorb all the components of the liquid attraction and taste, so that the bait is very pushed and intense.

This is a process that I use for the characterization of 50/50 and for some birdfoods, which allows me to put more attractive liquids than normal, in a mixture that was created specifically to convey these signals in water.

How did I get the idea?

I came up with the idea while observing the production of all-fruit baits at the Richworth factory, where I noticed that the attractant liquids, including the flavouring, were put directly into the dry rotating mixer, diluted with water and glycol, and then the eggs were only added later. (The visit took place at the end of the 90s).

Until then I had always seen tutorials by famous carp anglers who first broke the eggs, mixed the various liquids and then added the mix a little at a time until the mixing stage was complete.

I had already realised that the process seen in this way presented a strong criticality linked above all to the operating temperature of the room where the dough is mixed. I had realised that on the same quantity of eggs and flavourings, depending on whether the air was more or less hot, the same amount of dry mix was not added! Sometimes I calibrated for a kg. of flour and I was left with the mix ... other times I arrived short and I was forced to add flour because the dough was too soft (and if I finished the mix ... I was forced to put flour at random among those in the pantry!).

This is not a serious problem, but if you want to be precise about the stimulation levels of the baits, especially the more loaded and expensive ones, it should not be underestimated.

If I want the level of attractiveness of a kilo of mix to be made up of 10 ml of flavouring, it is clear that the kilo of flours must always be precise and not more concentrated or diluted.

I then realised that even in the culinary field one proceeds by pouring the liquids into the flours  and every good cook or pastry chef should tell you that it is unthinkable to do the opposite for the success of the dough!

I have therefore reworked the practice, verifying that in fact, when you make a dough, if you put the liquids in the flours and not the other way around, everything is better and more amalgamated.

This also has interesting developments in the dynamics of activating the starches which are essential for the raw phase of the dough. it is also perfect if you use mechanical mixers.

So the process takes place in 3 stages:

-First of all, the liquids are prepared well mixed together (WITHOUT EGGS).

I usually prepare them well before making the baits in quantities already calibrated for the kilograms of mix I intend to roll, in this way, resting for a few days, I promote the amalgamation of the various components.

-As a second step, the liquids are added to the mix, in the dedicated quantity, which generally varies from 100 to 250 ml. per kilogram of mix.

Knead for a few minutes by hand, or using a planetary mixer or drill mixer, until the flours have absorbed all the liquid, soaking in well.

PLEASE NOTE: at this stage the dough cannot be extruded and rolled because it is still too dry as it lacks the part of the egg needed to complete the construct.

Also at this stage I like to let it rest for about ten minutes because the hygroscopic components of some flours can absorb all the moisture by capillarity.

-The final stage is to complete the mixture, adding one egg at a time, until the right malleability of the mix is reached, which allows extruding and rolling.

Generally until the mixture is no longer sticky and not too hard to force into the extruder.

Then proceed as normal to create the sausages and pass them onto the table.

The addition of one egg at a time is essential because we cannot decide in advance how many we will need as the number depends on how many other liquids we have added and how hot it is in the room where we are doing the operation.

Normally 3 to 6 eggs are needed to complete the operation.

Of course, it is understood that putting in more liquid decreases the number of eggs, making the bait more or less soluble in water.

My advice is not to go below 4 eggs unless you specifically want to create soluble boilies.

In the new book in English entitled "Boilies" you will find all the professional tips for making very technical boilies. 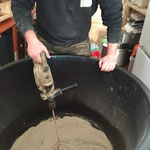 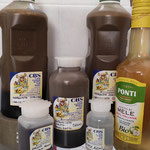 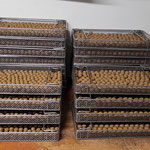 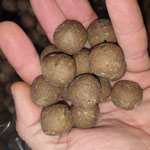 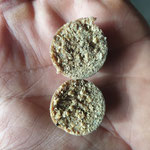 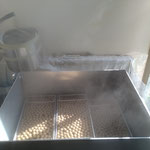 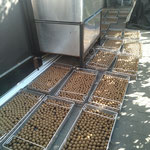 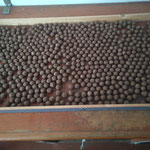